The word “singularity” has been thrown around a lot these days; Specially in the super AI believer world. But in the lack of a better word, I don’t have a choice but to risk being guilty of sounding cliche. Singularity is a point beyond which normal set of axioms and theorems of our understanding of a certain thing break down. It is what happens to all the understanding of physics beyond the event horizon near a black hole. It is also the point beyond which your idea expressed in seemingly harmless words gets into the hands of journalists who could make it sound like anything they wish.

I wrote this blog on immortality more than 10 years ago. The world has changed a lot in these years. Since then, In the order of increasing significance, the iPhone happened, re-useable rockets happened, LIGO happened, but perhaps the most important of all, a human Jeopardy champion was beaten by a very inanimate lump of silicon. Jeopardy involves the mastery of very high level of natural language skills and human context.

In the blog, I had mentioned about AI as one of the many possible paths to immortality. Given the pace of progress, today perhaps, super AI is our closest route to immortality. A super AI if done correctly, can obviously figure out the rest of the solutions for us. But stuck in a traffic Jam in a massive tunnel in Shenzhen, a certain jam in my brain suddenly cleared up and I found myself wondering about the meaning of it all. I have been lately reading up (listening actually!) the work of some of the leading “human” thinkers of our time who are all gung-ho about AI – Calum Chace, Nick Bostrom,  Ray Kurweil…. The one thing that struck me was that all of the above were looking at two extreme outcomes of us final having a super AI moment –

Wtf!!?? The second outcome is probably the one we should be more worried about. Picture this – There is this smart ass in your office who comes up with an idea that is better than yours every single time you come up with what you think is an original idea. Now imagine 100 others like that who simply trash every idea that you come up with and supersede it with something that is obviously better. How would you feel? Super AI is probably going to make it several orders worse. You give it up all, You don’t want to be wired! You take up some art classes for a couple of decades (remember you are immortal now!) and try your hand at painting something. You put it up in an exhibition where the painting next to yours is by some robot with a tin head half your size and it makes your painting look like the work of a 2-yr old. Your only choice… wire up to the super AI and let it guide you or should I say “control you”!!. What is your role exactly??? Why do you exist? 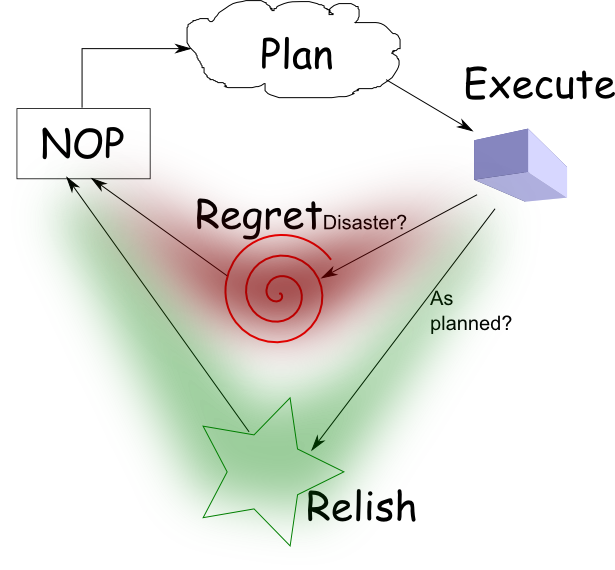 All of our long term activities could in turn be broken down into several chunks which looks like the cycle above. Of-course, there is a big grey zone between relish and regret and different people react differently to disasters. The kind who enjoy the journey don’t necessarily regret no matter what the outcome is. But the kind who enjoy the journey, enjoy it for the pleasant surprises. I don’t know of a person who can enjoy a monotonic tunnel journey for several hours, let alone several days on. But that’s exactly what life will look like when one lives long enough and has an organic reach to super AI. Surprising such a being is like trying to surprise god! The optimists may say –
“who knows? we will probably invent new ways of entertaining ourselves”. That brings me to the next point.

When with the help of super AI, one has seen it all, what does one do? play games perhaps? What kind of games? Chess? Boring drab. that did not even need super AI. some crazy multi-dimensional chess? But hold-on, a few seconds later, your extended AI has solved that too. To make matters worse, if it is a multi-player game, each participant exactly knows what the other participant in a game is thinking. Perhaps, we then begin to truly understand what a game has to be so that it is enjoyable. A game has to have artificial limitations. Why do we like a game of cards? Not because anything can happen, but because only a certain set of sequences are allowed to be played.

But when playing games, how do we make sure that no one is cheating consciously or sub-consciously with the help of extended super AI? Create a construct where super AI is out of reach? Perhaps, create a virtual world where players can project their persona on some Avatars and play as per the physics defined in that virtual world? Perhaps go one level further to make it exciting… Get into the virtual world and you can’t get out of it till you experience the pain of death in the virtual world!! And to spice it all up, what if you are not allowed to carry memories of your world into the virtual world, but just project your persona in a particular manner and let the game run it’s course?

And then it dawned upon me that we are probably one such projection!! Suddenly the Hindu concepts of Maya (illusion), Punarjanma (re-birth), Karma (no equivalent) , Manu (the first law-giver), Brahma (The creator of the illusion), Vishnu (the super AI)… all made such great sense. We can’t even tell how many iterations deep we are into such an illusion. To think that we are the first ones to create such a virtual world within a supposedly real world would be very gullible of us! How many deaths do I have to die to see the real thing?? Is there such a reality at all? Is there any meaning at all to life? If a Super AI that can be explained in it’s electronic nuts and bolts can entirely emulate and outperform a human being, aren’t we going to be convinced enough that we are just another machine moving randomly with a false sense of purpose and sentience?

And what’s wrong with super AI wiping us humans out? Don’t we all wish for a better future for our children irrespective of what happens to us? How is a super AI different from our children as long as it creates a better future for itself in it’s own way? How is a new generation of humans that are drastically different from a generation born 500 years earlier not equivalent to a drastically different super AI which nevertheless is our child.. only a brain-child rather than a gene-child.

I can’t predict the benevolence or malevolence of super AI with any degree of certainty, but it is clear to me that super AI will help even the dumbest of us to understand the meaning or the lack of it in our existence. And that will lead us to our Nirvana – The singularity of Sentience.

I am just beginning on this topic again after a decade! More to come in the subsequent posts.