It was bring your kid to office day at TI and my daughter’s bday was coming up soon as well.  I thought I should do something to spook a few kids with some magic. Given the choc-o-bloc schedule these days, I did not want to spend more time than 2-3 hours. Fortunately for me, my team at TI makes a secret ingredient for lots of magic – A 3D sensor.

I started with a OPT8241-CDK (Camera Development Kit). The kit provides a point cloud of 320 x 240 points. Point cloud is nothing but a collection of X, Y, Z and I (intensity) for each pixel in the camera. For example, this is what the point cloud of a lamp looks like –

After some thought, I decided to make a simple invisible musical instrument that even toddlers can appreciate (my daughter just turned 3). The 3D camera was to face up so that kids can move their hands over the camera to generate musical sounds. The distance of the hand from the camera would fix the amplitude and the lateral position of the hand would fix the note.

The code simply identifies the nearest blob in the scene and it’s 3D position. The ‘Z’ co-ordinate is used for the amplitude, The ‘X’ co-ordinate is digitized and used for the selecting the note. Since I decided to do everything in python, the midi-synthesis was just another line of import statement. All in all, as planned, I was able to complete the code under 2 hours. But the midi library was interesting and I ended up spending another 2 hours just playing with the various instruments available. Seriously, fluidsynth library is fun. The python code is hosted here.  If you have an OPT8241-CDK with you and Voxel-SDK up on linux, all you need to do is run the python code.

The results (At my daughter’s school) :

It was May, 2008. Exciting times. We had just completed the final testing of our first set of collar electronics, got the servers and the website ready. We felt a great sense of accomplishment that we had completed our final year MTech project successfully! We could not have been more wrong about the completion part. Infact, the project had just begun. We did not do our project just to earn grades and let it rust in the archive cupboards once we were out of the university. We did it so that it will have a significant impact on the lives of atleast some real people (or animals).

Once the electronics was done, our professor (Dr. Andre Pittet) started looking for some serious customers. In the meantime, we kept the collars running and tested them rigorously. They were fitted in our cars and tested under all weather. The packaging wasn’t trivial. We needed something that will withstand the elephants’ ways of life. To get an idea of the wear and tear involved, one should see the elephants rub their bodies against a tree. The collars also had to be water proof (Elephants are excellent swimmers. Infact, they even swim 1-2m under the water).

Finally, on July 8th, we headed to the forest with two collars. We set off quite early in the morning as it wasn’t going to be a long day in the forest and it gets very dark very early.  We were four of us.. Our project guide Dr.Andre Pittet with his wife , Radhika (my project partner and wife) and myself in a Black Scorpio. The journey till the forest was quite uneventful. We got into the forest at about 3:00 PM in the afternoon. It had rained recently and some of the stretches were quite tricky even for the Scorpio.  Finally, we got stalled at a point very near to the Aanemane camp.

We had to finally crank the car out.

We made it after about an hour’s struggle. The view was totally worth it. A beautiful wooden home in the middle of nowhere. 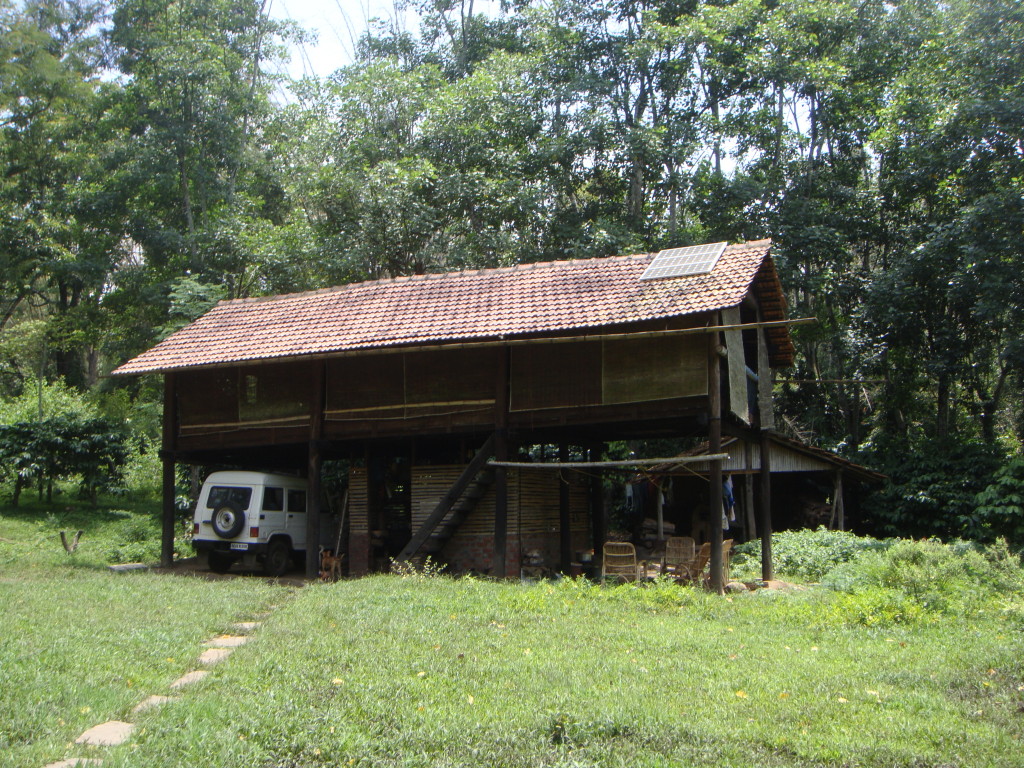 We explored a bit of the surroundings, rested, had food and dozed off quite early for the day. The night was quite eventful. Prajna had already warned us about the rats. But what I did not expect the rats to do was to lick my pinky toe in the middle of the night. I woke up with a loud thud and spent the rest of the night in a semi-sleep state.

The morning was delightful for more many reasons. We had kept one of the collars for testing and for the first time it was working in actual jungle conditions.

We were getting our other collar ready. The electronics packaged in an aluminium housing is shown below. The square patch antenna is the GPS antenna. The smaller antenna on the left is the GSM/GPRS antenna. The top of the package (not shown in the image) was a durable plastic.

We did some last minute testing with the debug module.

The elephants took the collars well. They did not seem to mind the extra 2Kgs. They were looking pretty!

We were done by about 4:00 PM in the afternoon and started back to Bangalore before it got dark. During the testing, the collars have worked for more than 6 months at a stretch with 24 fixes and 12 transmissions per day. It has been more than a month now and the collars are still ticking. It will be interesting to see what happens in the coming months.

Catch up on Aanemane news here…